Read more here: http://www.tri-cityherald.com/news/nation-world/article47178385.html#storylink=cpy
The FBI will begin tracking cases of animal cruelty nationally in 2016, a move advocates hope will bring more attention to the crime among law enforcement agencies and underscore the link between animal abuse and other violent crimes.

Until now, animal-related crimes have been reported into a catch-all category in the FBI’s National Incident Based Reporting System. The database collects crime reports from police departments across the country.


“There was no way to find out how often it occurs, where it occurs, and whether it was on the increase,” said Mary Lou Randour, senior adviser for animal cruelty programs and training at the nonprofit Animal Welfare Institute. “Empirical data is important. It’s going to give us information about animal cruelty crime so we can plan better about intervention and prevention.”
Randour and others say tracking animal cruelty cases is especially important because research has shown that violence against animals can be an early indicator that a person will be violent toward humans, and that animal abuse often occurs alongside other crimes such as domestic violence.
“In animal abuse, you have total power over the animal,” said Baltimore County prosecutor Adam Lippe, who handles cruelty cases. “If you’re willing to exert that in a cruel, malicious and vicious way, then you’re likely to do that to people too, who don’t have power, like children and vulnerable adults. It’s an issue of a lack of empathy.” 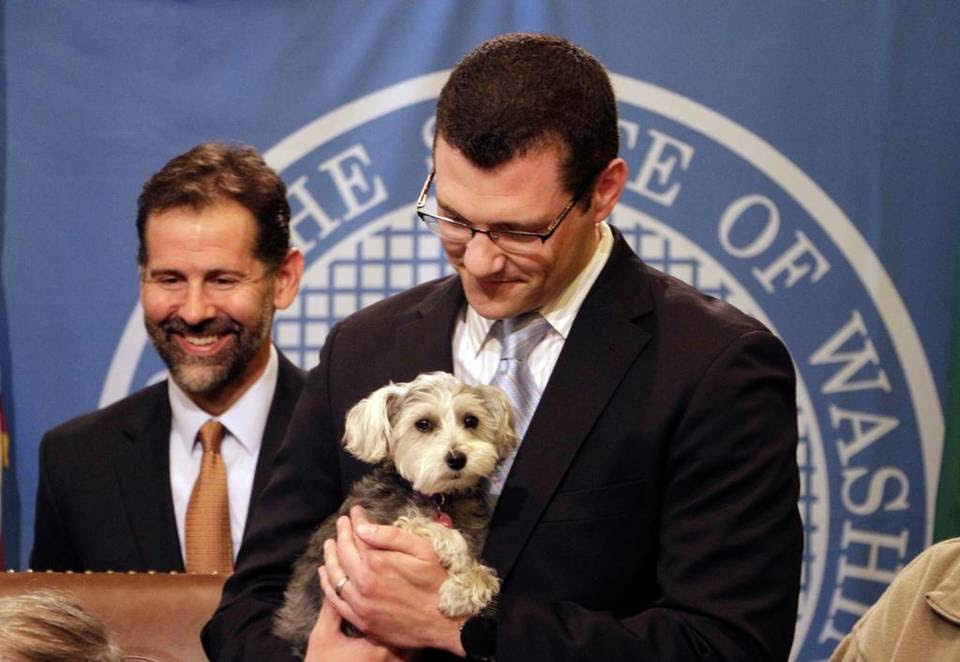 Sen. Joe Fain holds his dog, Waffles, as Gov. Jay Inslee signed in May a bill Fain sponsored that expanded the state's animal cruelty laws in Olympia. The measure makes it a civil offense to lock an animal in a car or enclosed space in dangerous conditions, like extreme heat or cold. The FBI will begin tracking cases of animal cruelty nationally in 2016.
Read more here: http://www.tri-cityherald.com/news/nation-world/article47178385.html#storylink=cpy

The National Link Coalition, which promotes understanding of the connection between animal abuse and other crimes, says witnessing animal abuse and neglect can desensitize a child to violence and impede the development of empathy.
Randour, who advocated for the FBI change for years, says a spouse may use violence and threats against pets as part of a pattern of abuse.
“It is a form of interpersonal violence,” she said. “It’s another way to try to gain control and power or exercise intimidation.”
Some serial killers, including Jeffrey Dahmer and David Berkowitz — the “Son of Sam” — abused animals when they were young.
Starting in January, the FBI says, police departments will be required to report animal-related crimes to the national database. The FBI will categorize them as a “crime against society.”
Incidents will be divided into four categories: neglect; intentional abuse and torture; organized abuse such as dog fighting and cock fighting; and animal sexual abuse.
The FBI’s Uniform Crime Reporting Program is used by criminologists, law enforcement and researchers.
John Thompson, deputy executive director of the National Sheriffs’ Association, helped push for the FBI change.
A few decades ago, he said, animal cruelty was not on the radar of many law enforcement officers.
“If there were an animal crime, we would just send it over to animal control or ignore it,” Thompson said.
Some police departments now have dedicated resources for animal cruelty. The Baltimore Police Department has a four-person team, spokesman Lt. Jarron Jackson says. That’s up from one officer in 2009.
Public awareness has also increased through high-profile cases.
For instance, former Ravens player Terrence Cody and his girlfriend were found guilty last month of animal cruelty charges in the death last year of Cody’s dog — though both were found innocent on more serious felony aggravated cruelty counts.
Also this month, a case involving a Baltimore police officer who slit a dog’s throat made headlines. The officer, who said he had been trying to put the animal out of its misery after it was strangled on a dog pole, was acquitted of animal cruelty charges.
Once the FBI starts tracking animal cruelty, Thompson says, it could take five or six years before there is enough data to analyze trends.
Dr. Martha Smith-Blackmore, a forensic veterinarian who studies animal abuse cases, said she hopes better numbers will help experts analyze the backgrounds and patterns of animal abusers.
“When I started seeing cases of animal cruelty, I realized that these animals are stuck in the same dysfunctional families and suffering from the same ills as the people stuck in these households,” she said.
Smith-Blackmore, who is based in Massachusetts, consults and testifies in animal cruelty cases. She recently testified for the prosecution in the Cody case in Baltimore County.
“I hope that (the new data) us going to bring to light some associations of who animal abusers are, what their backgrounds are, what they go on to do,” she said.
Thompson, a former police chief of Mount Rainier in Prince George’s County and a former Prince George’s assistant sheriff, says he has become convinced that law enforcement needs to pay attention to animal crimes as a potential link to other crimes.
“This is a community problem,” he said.